Silent Genocide... Christians are Being Targeted Yet the Media is Silent 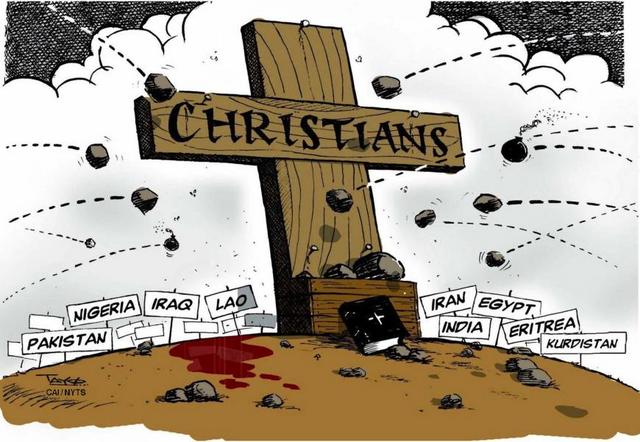 In a world where Christianity was once the predominant religion it seems almost odd to say that within the short span of fifty or so years they have gone to being the most persecuted group on earth. In the Muslim world this is understandable. "The religion of peace," is merely a thinly disguised political movement designed to take over the world and impose yet another totalitarian regime. And although Islam is mostly to blame, they're not the only ones. The dynamic is a complex one. The Islamic states need the west to sell their oil, and as the old saw goes, "you don't bite the hand that feeds you," although some of the more extreme Muslim sects are guilty of that as well. Without the west, Islam will sink back into the morass of pre-medieval barbarity, financially as well as culturally. The vast majority of Muslims are decent hardworking people, but it's the radicals that are exported to western countries as "refugees," by their respective countries as a part of implementing the globalist New World Order.

While covering these attacks the mainstream media invariably omits that the victims were Christians, parsing the attacks as assaults on "humanity." For example the Easter attack in Sri Lanka was reported as an attack on "people of faith"- all faiths. The attack in Sri Lanka was against Christians celebrating Easter Mass, not "people of all faiths." Hillary Clinton and Barack Obama both came out with almost identical statements calling Easter an attack on "Easter worshippers," not a word about Christians.

Obama: “The attacks on tourists and Easter worshippers in Sri Lanka are an attack on humanity. On a day devoted to love, redemption, and renewal, we pray for the victims and stand with the people of Sri Lanka.”

Hillary Clinton:  “On this holy weekend for many faiths, we must stand united against hatred and violence. I’m praying for everyone affected by today’s horrific attacks on Easter worshippers and travelers in Sri Lanka.”

Easter is a celebration of the resurrection of Jesus Christ, not a holy weekend for many faiths as Clinton asserts, not to mention that the likelihood of either Obama or Clinton praying is virtually nil- unless it was praying for more money and power. It was an act to pander to other globalists all of whom despise Christians. The Christians who perished in Sri Lanka did so for their Christian faith. The absence of any mention of the Christianity of those that died was a theme consistent for leaders around the world.

Indian Prime Minister Narendra Modi condemned “the horrific blasts in Sri Lanka,” but said nothing about how the violence targeted Christians, and Turkish President Tayyip Erdogan called the attacks “an assault on all humanity.”

Whenever a mosque or synagogue is attacked, the religion of those killed or wounded is always there in the headlines, without fail. It's only when the victims are Christian that their religion is absent from the reporting, if the attack is reported at all. Throughout America, Europe and Asia, Christians and their churches have come under attack, but the mainstream media is almost silent- unless it's a worldwide landmark like Notre Dame. Leading up to the Notre Dame fire over 800 churches in France alone have been vandalized and/or damaged, yet have been ignored for the most part by the news. The same is true of attacks on Christians themselves.

Here are some reports from around the world:

This goes on day after day, month after month, year after year and the MSM is strangely silent. If the victims had been from any other group- with the exception perhaps of the Falun Gong- their religious affiliation would be splattered across the headlines and the acts decried as hate crimes. Yet in the 21st century world hating Christians has become the cause celebre. It's easy enough to point to radical Islam or any other group to blame, but the real perpetrators are much higher up on the food chain. This is all a carefully orchestrated attack by globalists on the only stumbling block to world domination- Christian values.

In America the vast majority of the religious attacks are done by what the MSM characterizes as "white supremacists." They typically blame the president and guns themselves. However all of these people that are involved in church shootings (and school shootings targeting Christians) have a history of mental illness... and for some strange unfathomable reason their therapists have ties to the Deep State- military intelligence in particular.

The Islamic world, rich in oil has been a target for decades. Iraq and Libya were attacked for their resistance to implementing a Rothschild controlled central bank and daring to trade oil in currency other than the US dollar. The globalist plan was "seven countries in five years." It's no wonder that the people of the Middle East are upset, they were invaded and have been at war for twenty years if not longer. But this fails to explain why the vast majority of the "refugees" are military-aged men, not women and children. The globalists are amassing an army to destroy Christianity. This isn't a religious battle, it's an ideological one.

In Africa, the UN has been the catalyst between the multinational corporations and radical groups. Keeping Africa in a state of constant chaos makes it easier for the corporations to strip the continent of their enormous natural resources and prevent countries from establishing a manufacturing base, enabling them to join the world economy. To profit, Africa must be held in the same conditions as it was during colonial times- a neo-colonialism. Radical groups such as Boko Haram in Nigeria are given arms and money and Christians are targeted to create the illusion of religious turmoil. For many years after colonialism the multiplicity of ethnic and religious groups in Nigeria got along very well, until recently when they became targeted by the globalists.

The western media is merely the propaganda arm of the globalist elite. Their job is to sow division and discord- and they do it well. Islam is not the problem. Christianity is not the problem. Globalism is the problem- the globalists are set on forcing a totalitarian regime on a worldwide level. The average Muslim and the average Christian are more alike than the MSM would have us believe. I know Muslims, my friend Mohammad owns the gas station where I buy gas and he is a great guy- he enjoys my books and he's never tried to kill me. He's just a guy making a living like the rest of us. Like the old saying goes, "the squeaky wheel gets the grease," and all you ever hear about Islam is about the radicals. Like the Left in America, they are just unwitting shills for the global elites... maybe that's why they've joined forces- they're all being paid out of the same pockets.

People around the world have far more similarities than differences- they love their families, they do the best they can for them. They try to get along with their neighbors and for the most part live their lives starting as little trouble as possible. The discord comes from above- the global elites who use every psychological trick in the book to capitalize on the minor differences between people and amplify them to the point that they can be used for political gain... divide and conquer, it's the oldest trick in the book. As for the role played by the MSM... unfortunately they have almost a total lock on the dissemination of information. The internet has thrown a sabot in the propaganda machinery to some extent, but the vast majority depend on the "nightly news" for information. If it wasn't reported, then it didn't happen is the snakeoil they're pushing. This is how the silent genocide is perpetrated.

I know right?! Makes ya wanna scream. Hey, I just saved the link regarding China rewriting the Bible for me to read. Oh Boy, here we go! No big surprise and logical but, oh yeah, here it all comes. All we hear for information is silence. If the independent voices get sewn shut...…….we will be dodo birds. Sitting there unaware and then, THUMP. We all know how that ended. Wonderful gathering of info here. Reposting!

Thank you my good friend! If it comes to it- I'm going down shooting!!!

You know, I've been wondering if the ultimate goal of the Anti-semitic and LGBTQ+ legislation going on right now is to ban The Bible as an instrument of hate and discrimination. Stepping stones. Get it on the books and then alter the definition, use, and expand it. They have the Noahide Laws passed in congress (H.J.Res.104 ) so that's sitting there ready for when the time comes. The Bible is as dangerous to them as our guns and free speech. Just sayin.

Absolutely- first they got the Bible out of schools. It's what David Icke calls "the totalitarian tip-toe."

Sadly the media chooses to be politically correct rather an spiritually or morally correct, It has been bought out and silenced by the demonic forces. I receive publications from CRU (Campus Crusade for Christ) and Billy Graham ASSn that constantly speak of the war on Christians in the Middle East and Far East/ Africa. It is real. And yes there is a silent war on Christians here in America. It is subtle but real. Many Christians in the USA have chosen to be worldly, have fewer babies and be bound by political correctness. They are afraid to stand for truth and Jesus. Thanks @richq11

Sadly many of the churches are pushing it- gay and lesbian clergy. The gay mafia has taken over the Catholic Church- they're pushing climate change rather than saving souls. The purpose of religion is supposed to be getting as many as possible into heaven, not bolstering self-esteem... that's the work of the devil!