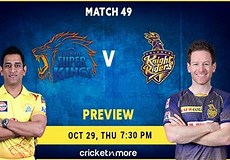 Then in the 2nd round Chennai Super Kings came to bat with a target of 173 runs. The batsmen of CSK players played great after a while even though they got a little slow run at first. As a result, they lost 4 wickets for 178 runs and won the match. Watson (14), Ruturaj Gaikwad (72), Rayudu (38), Dhoni (1), Sam Curran (13) and Ravindra Jadeja (31) were the top scorers for the Chennai Super Kings. Among the Kolkata Knight Riders, Pat Cummins and Varun Chakravarthy took two wickets each.

"The player of the match today is Ruturaj Gaikwad".

sports cricket ipl match t20 writing india
28 days ago by anima0167
W$1.61
Reply 0
Authors get paid when people like you upvote their post.If you enjoyed what you read here, create your account today and start earning FREE WEKU!